Imagine a world without bees, butterflies, and flowering plants. That was Earth 125 million years ago. Turn back the clock 400 million years, and there were no trees. At 450 million years in the past, even the earliest insects had not yet developed. And looking back 500 million years, the land was devoid of life, which at that time flourished in a profusion of strange forms in the oceans.

These and other major turning points are the amazing story of evolution. Given the broad scope of the subject, this course is taught by two professors: Anthony Martin, a paleontologist and geologist at Emory University, and John Hawks, a paleoanthropologist at the University of Wisconsin-Madison. Each is an outstanding teacher in his field, adept at making the subject interesting and accessible no matter what your background in science.

In 24 lavishly illustrated lectures, you will learn about Earth’s major transitions, each of which brought forth new possibilities for life. You will study the conditions that led to the first complex cells, flying insects, flowering plants, mammals, modern humans, and many other breakthroughs. And in the process of studying the past, you will gain a powerful understanding of the present world. 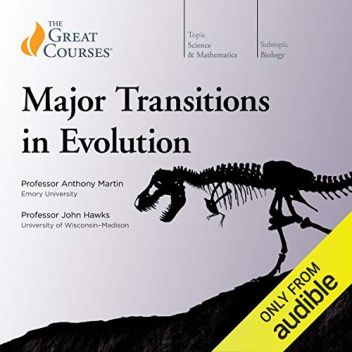